Pokémon Go is the hottest craze right now and is quickly becoming one of the most viral mobile applications of all time. Eleven percent of U.S. Android owners have installed the app and six percent are engaged in the game on a daily basis, staring at their phone screens as they walk the streets looking for animated characters. Pokémon Go use now surpasses Twitter’s daily users. People are spending more time in its app than on Facebook. Besides being the hottest new mobile game and a major phenomenon, it’s most significant impact is that it has introduced of a totally new disruptive technology to the consumer entertainment landscape.* Pokémon Go represents one of those moments when a new technology, in this case augmented reality, breaks through from being a niche use by early adopters to going mainstream.

Pokémon Go players move through the physical world following a digital map on their screens, searching for cartoon creatures that appear at random. They look through their smartphone cameras to find Pokémon. When an animated creature appears, they toss Pokéballs at it until it is subdued. (If you haven’t yet been caught up in the Pokémon Go craze and want to learn what the game is all about, check out this video). 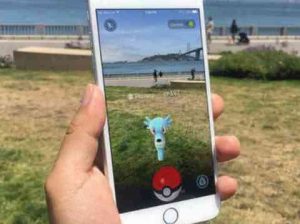 * The first augmented reality video game was Ingress by the same developers of Pokémon Go, but it never captured a large enough fan base to attract a mainstream audience.