More about the Social TV competition

In my blog last week I discussed how smartphones have turned the activity that consumes the majority of our leisure time, TV viewing, into an interactive social experience. With smartphones (and other screens), TV viewing can connect viewers in the moment with friends, content creators, stars and both likeminded and not-so-likeminded viewers, making it a very social experience and therefore even tougher completion for location-based venues. This new social leisure experience is one part of a phenomenon called Social TV, simultaneously using social media while watching TV.

This is not some nascent activity. It has become a major consumer phenomenon. Research from the Council of Research Excellence in the fall of 2013 found that one-sixth (16.1%) of TV’s audience is using social media at the same time and slightly less than one half of those, or 7.3% of TV viewers, are engaged in socially connected viewing – social media conversations related to the actual show they’re watching. According to their research, the vast majority (90%) of that socially connected viewing takes place on Twitter.

Twitter Nielsen now tracks social TV on Twitter. The company found that 36 million people in the U.S. sent Tweets about TV in 2013. Analysis of their 4/28/14-5/4/14 tracking showed there is a broad age and gender distribution of who Tweets across the different programming and there are significant differences in the age and gender of Tweeters based on the type of programming. Not too surprisingly, males are the majority Tweeters for sports programming, with the highest percentage (89%) for cable basketball. Both cable basketball and cable boxing have the highest share (over 90%) of under-35 Tweeters. Females are the majority Tweeters for reality and drama series shows. 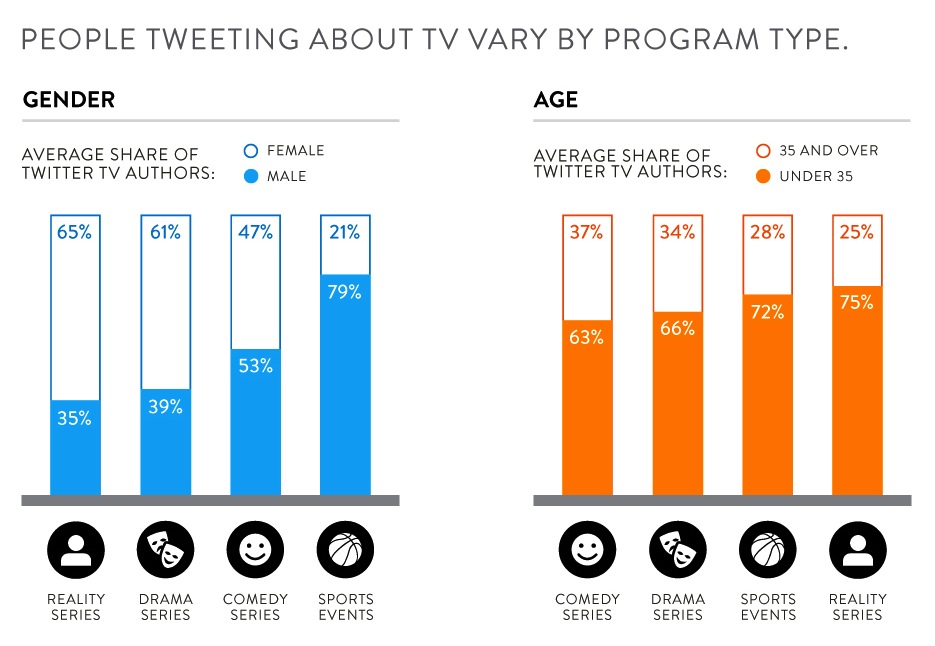 The second social media channel for TV conversations is Facebook. February 2014 research by SecondSync found that contrary to previous assumptions, 60% of TV-related Facebook interactions about a TV show happen while viewing the show. Their research found that up to a quarter of the TV audience is posting content relating to the show they are watching on Facebook, and 80% of that is occurring on mobile devices. Although SecondSync found Facebook to be a more significant socially connected TV viewing media than the Council of Research Excellence research that found 90% of simultaneous TV viewing conversations were occurring on Twitter, it still substantiates the magnitude of simultaneous Social TV conversations via social media.

Twitter and Facebook Social TV are examples of just one of the many new kinds of growing digital disruptions to yesteryear’s entertainment landscape. To complete today and in the future, location-based entertainment must rapidly evolve and raise its bar to continue to capture a share of the consumer’s leisure time.