It’s no longer about targeting the middle class

Back at the end of the 20th Century when indoor family entertainment centers (FECs) first took off, they targeted the middle class as their primary customer. Society has changed a lot since then. Due to growing income inequality, the disproportionate rising cost of non-discretionary items such as health care, housing and education and other factors, the middle class has shrunk and the number of discretionary dollars the remaining middle class has to spend at leisure venues has shrunk as well. The middle class is no longer the target market of choice for location-based entertainment (LBE) of all types, including what are broadly termed as family entertainment centers (FECs).

Today, in the second decade of the 21st Century, high-income households that can best be described as affluent constitute the overwhelming share of the potential market for LBEs. They are the consumers who need to be targeted to succeed in today’s leisure landscape.

The graph below shows 2013 household entertainment, dining and alcoholic drink spending at community-based leisure venues (CBL) for the five different quintiles of household income. As the graph clearly illustrates, the affluent, high-income households with incomes above $95,000 account for the lion’s share of spending. They spend more on community-based entertainment than the entire 80% of lower income households do. If we look at the middle and fourth quintiles, those with incomes between $35,000 and $95,000 with average incomes of $60,000, who might be defined as the middle class, those 40% of households together only spend 2/3rds (66%) as much as the affluent households do. 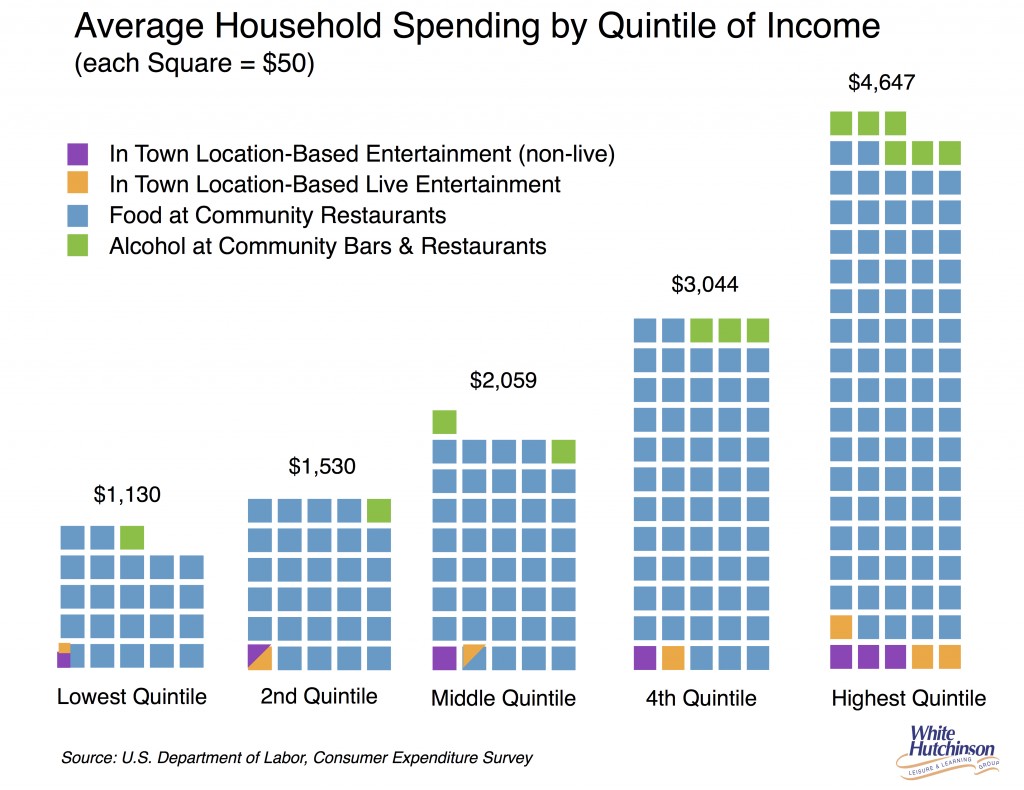 The top quintile of income, the affluent households also spend almost as much (89%) that the other 80% of households together spend on dining and drinking at local restaurants and bars.

Now here’s something that is really enlightening. Total household spending at local restaurants and bars is 22 times the amount spent on community-based entertainment. That is one of the reasons why the new upscale social restaurant-entertainment venues are so successful. They target the upper socioeconomic who account for most of the spending and they not only go after a share of their entertainment spending, but also a share of their food and beverage spending as well. Heck, just capturing 3% of affluent households’ spending at restaurants and bars generates more revenue than capturing all of their entertainment spending at local venues that don’t offer live events such as concerts, plays, etc.

Defining affluent households in broad terms with a single income threshold is a little misleading. A single person needs less income than a family of four to meet her/his non-discretionary spending needs and still have adequate non-discretionary dollars to spend at CBLs. Here’s a more realistic breakdown of 2013 affluent incomes by household size:

Now, if you want to attract the affluent market, you have to design to meet their expectations, values and tastes. You can’t design for the middle class and expect to do very well at attracting affluents. That’s sort of like saying since Denny’s serves steak or Long John Silvers serves fish, it will attract the same customer that eats steak and fish at a McCormick & Schmick’s restaurant. Most of the affluent households will be college graduates who have more refined values and tastes. It’s all about serving up the entertainment, the food and beverage and the hospitality at a higher level than what it takes to please the middle class.

Affluents make decisions of where to frequent based on the décor and atmosphere of the facility, the quality of food and beverage, the level of hospitality – the quality of every aspect of the entire experience. And they are willing to pay a premium for what they rate as a premium experience. And if it doesn’t meet the higher level of experience they want to have, they will just stay home or do something else. There’s nothing genetically wired in higher income humans that says they have to bowl at some so-so facility, eat mediocre food and beverage or ride go karts with torn seats.

And what becomes a win-win when you design and operate a CBL for high income, college-educated affluents, is our company’s research shows you will still get a share of the middle class when they can afford to come.