In my April 17th blog post, I reported about the baby bust based on the 2011 data, the most recent that was then available from the National Center for Health Statistics. An alternate source of birth data comes from the IRS.

The IRS now requires parents to provide Social Security numbers for all their dependent children on their tax returns. So for the last several decades, all newborns in the United States have received Social Security numbers. The applications closely track actual births based on their counts by year of birth. Although the Social Security Administration’s numbers are not identical to the complete count of births provided by the National Center for Health Statistics, they are available sooner and are an excellent indicator of birth trends.

The latest statistics just released by the IRS show that the baby bust has continued into 2012. The Social Security Administration provided 3,931,200 Social Security numbers for newborns in 2012. This was 19,502 fewer than in 2011 and 393,000 below the peak year of 2007. The baby bust is ongoing but the rate of the decline is gradually slowing. 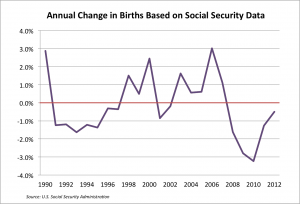 When we examine the percentage rate change in births, it is interesting that the rate actually started declining in 2007 before the Great Recession could have had any real impact. 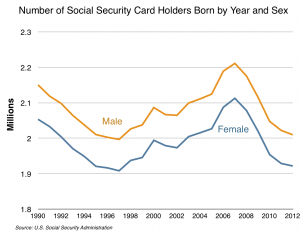 The question then becomes are we seeing the beginning of a long term trend where the birth rate will continue to decline slightly or basically remain flat versus the increases that we experienced over the decade between 1998 and 2007 (excluding 2001 and 2002)? Of course it could be argued that the declines in 2001 and 2002 were the result of the 2001 recession, so the declines we are currently seeing are all resulting from the Great Recession and its hangover period. Only time will tell.

View all posts by Randy White →
This entry was posted in children's entertainment, feasibility, Location based entertainment and tagged baby bust, births, trends. Bookmark the permalink.
Tweets by whitehutchinson