Over the past year my presentations at conventions and articles in our Leisure eNewsletter have discussed the social stratification trend of location-based entertainment spending –spending by higher income households is growing to be a larger and larger share of all such spending.

The Bureau of Labor Statistics just released for the very first time consumer expenditure data on a mid-year basis, for the twelve months from mid-2011 through mid-2012. The data shows that the social stratification trend is continuing. In the calendar year 2010, the top 20% of income households (top quintile with $95,000+ incomes) accounted for 55.4% of all spending for location-based entertainment and fees. For the mid-2011/2012 period their share had grown to 56.9% of all such spending. 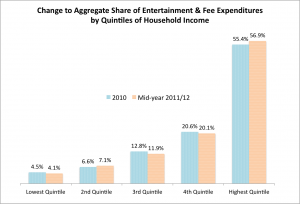 Back in 2000, the top quintile of income households only accounted for 50.5% of all such spending. So their share has grown by one-eighth while the share of spending by especially the lower income households has declined.

What this means is that the market for location-based entertainment is shifting more and more to higher income households and they are the market to be targeted since those 20% of households now account for more than one-half (56.9%) of all such spending.

View all posts by Randy White →
This entry was posted in Location based entertainment, Out-of-home, socio-ecomomics and tagged social stratification. Bookmark the permalink.
Tweets by whitehutchinson