BECs still prisoners of the past

BEC is the acronym for bowling entertainment center. It’s the name given to older bowling alleys that renovate and update their facilities by removing some of their lanes and adding gamerooms, laser tag and other attractions. My research indicates that Brunswick Bowling first coined the name and acronym back in 2001. Brunswick estimates that 400-500 older bowling alleys have been converted to BECs.

Sometimes these venues are also called hybrid bowling centers, although that name generally is used to describe new-build centers that have bowling with other attractions.

So here’s the problem with using the name BEC or hybrid bowling center for these mixed-anchor centers that include bowling. The language and words we use have been shown to influence both our thoughts and actions, what is called linguistic relativity. The BEC and hybrid bowling center terminology imprisons the developers and operators of these centers in the past. The names clearly say they are still predominately in the bowling business, so that is exactly the way they design and run their centers. This is most unfortunate, as that makes their view of what their centers are a prisoner of the past and keeps them from breaking from the past to be successful in the future.

It’s understandable why Brunswick, a major bowling equipment supplier, would have coined the name BEC, as they are of course prisoners of the past themselves trying to promote the sale of bowling equipment and furniture while stuck in the shrinking bowling industry. The problem is that the bowling industry, originally built around the sport of bowling and bowling leagues, is on its last legs as a venue defined by bowling.

The most successful centers today, the New School centers that include some bowling, don’t even consider themselves as part of the bowling industry. They have taken the sport out of bowling and consider the activity only one of many elements that contribute to a high fidelity social atmosphere and experience for their guests. In fact, bowling is only a small part of their revenues. It is just one of many things that facilitates friends and family to have a great social experience together. Quality food and beverage is basically the anchor attraction at these New School centers, served not only in dining areas and at bars, but also at the lanes, making up 50% or more of revenues. Other interactive social games such as laser tag, bocce ball, ping-pong, shuffleboard and other group games typically make up the balance of the mix.

The paradigm paralysis of the Old School bowling suppliers is very evident at Brunswick Bowling’s recent conversion of one of their own older 56,000 square foot bowling alleys into a BEC in Buffalo Grove, Illinois named Brunswick’s. They removed lanes to make room for a gameroom and laser tag, left 32 lanes and added their attempt at a destination restaurant with Tavern ’45. They remodeled the facility, but the gameroom and laser tag entry lack any appealing design. In fact, it is difficult to even find the laser tag although it is front and center. I had to walk thru the gameroom area twice before I found it. The center still looks like a traditional bowling alley, just with more modern décor, but not necessarily what you would describe as having an 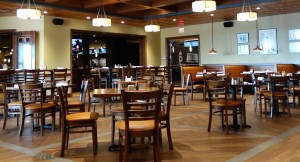 upscale ambiance. The Tavern ‘45 is not at all inviting as a restaurant as it lacks any ambiance and appeal as a casual dining destination. It’s basically a bunch of tables placed in a room with abar. When I was there one early Sunday early evening, it was closed with all the chairs turned upside down on the top of the tables. You wouldn’t have found that at any of casual dining chains.

The problem is you can’t put lipstick on a pig and expect it to transform the public’s perspective that it is no longer a pig. I’m sure the BEC renovations increased the revenues. However, Brunswick’s still thinks and acts like a bowling alley, but a more spruced up one with two added attractions. The big issue is like bowling alleys of old, it is trying to be a little bit of something for everyone. At one end there is the tavern and bar, obviously targeting adults (but not too successfully). At the other end is a gameroom and laser tag, basically targeting kids coming with their families. And in the middle is bowling where they are trying to mix both target markets as well as league bowling with casual bowling. In affect, they are trying to keep one leg in the past and one in the present, but even their present approach is falling out of date. The center is definitely not future proofed based on the current evolution of location-based social leisure venues.

Where bowling is finding great contemporary success is not at BECs or hybrid bowling centers. Rather is it at adult-targeted venues that include bowling, but don’t make bowling the anchor attraction. Just look at Punch Bowl Social, Southside Social, Pinstripes, Level 257 or many other new concepts. They are adult-targeted leisure venues creating a social atmosphere centered foremost around great food and drinks and secondarily around social games and entertainment, of which bowling is only one. These venues were not developed by owners who came out of the bowling industry, so they didn’t have their thought process stuck in the box of bowling operators who continue to think they are in the bowling industry. These New School operations are not prisoners of the past. Rather, they’ve taken the sport out of bowling and treat it just as a casual social game. These New School operators understood that bowling has a role to play in creating a social environment, but it was not the dominant anchor. They also understand the need to create a social leisure environment that appeals to higher socioeconomic adults, rather than the middle class. Most of all, they understand they are not in the bowling industry.