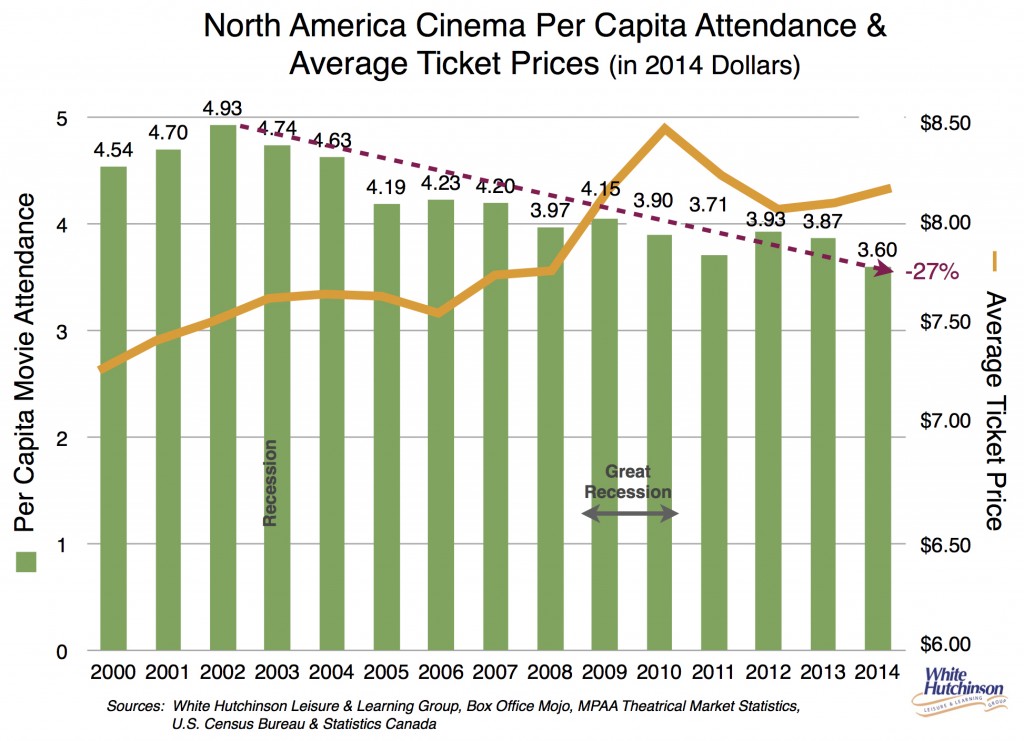 We’ve been following cinema’s decline for many years. Every year Hollywood reports declining attendance, they attribute it to the poor quality and draw of movies that year, the lack of blockbuster films. That is rather hard to believe when it’s a decline spanning over a decade. And you can’t really blame it on the Great Recession, as the decline started back in 2003, almost five years before the economic turndown. And although the middle class is becoming more economically squeezed than ever, moviegoing is the most economical form of out-of-home entertainment there is at an average ticket price of just over $8.

Truth be told, there are much more fundamental reasons why moviegoing is on the decline. It has a lot to do with the fast growing digital entertainment and social media competition. Movies are no longer the only game in town. We now have smartphones, tablets, large screen HD TVs and instant video and movie streaming. We have increasingly higher quality television programming. We have instant entertainment anywhere. The lure of digital devices is keeping people away from cinemas.

Brooks Barnes at The New York Times says the real problem is generational, “(In the past) young ticket buyers traditionally turned out weekend after weekend – with the quality of the films mattering less than the opportunity to fraternize. But this group is staying home more often.” Nielsen reports that during the first three quarters of 2014, Americans aged 12 to 24 saw 15% fewer films in theaters compared to the same period in 2013. In 2013, the number of frequent moviegoers between the ages of 18 to 24 fell by 17% according to the Motion Picture Association of America.

What we are seeing is the growing attractiveness of High Convenience – instantly accessible, enjoyable and low and no cost digital entertainment and social media – while the Fidelity of moviegoing has not increased enough to offset that increasingly attractive alternative. The higher the Convenience of digital entertainment and social media becomes, the higher of Fidelity of real world experiences needs to become to be competitive.

A few theater chains are raising the Fidelity of moviegoing. One example is AMC Theatres, which has pulled the standard movie seats out of a number of theaters and replaced them with lush electric recliners to counter the comfort of sitting in lounge chairs at home while you watch a movie or binge-watch a Netflix series. This decreased the theater seating count by two-thirds. AMC also added reserved seating when you buy your ticket on-line. They also added food and beverage, including alcohol. The result is a significant increase in attendance. AMC understands that the moviegoing experience needs to be more than just the film, it’s the Fidelity of the entire experience of devoting around 2.5 hours of your limited leisure time to being in the theater, and that doesn’t count the time to travel there.

The declining attendance that is happening to moviegoing is happening to just about every type of out-of-home entertainment. Participation and average household spending on almost all types of location-based entertainment is on a long-term decline that started back in the early 2000s, just like moviegoing. However, just like AMC Theatres, there are players who have learned how to be successful in a smaller market by increasing the Fidelity of their experiences. Examples include TopGolf and Punch Bowl Social that we wrote about in this month’s issue of our Leisure eNewsletter.