Disruption by a new 3rd place with lubricated socialization

My blogs and our Leisure eNewsletters have included a series of articles over the past few years featuring a general theme about how digital technology is disrupting real world out-of-home experiences and socialization. My last blog discussed how digital technology is shifting our social interaction from taking place in the real world to taking place in the digital world, especially on the smartphone.

Well, those Starbucks community tables, as well the entire store, are about to undergo a dramatic change in the evening, which I predict will create a new social venue destination that will be disruptive to restaurants and bars.

Back in 2010 in Seattle, Starbucks opened its first experimental unit that sells beer and wine in addition to its normal beverages and food. Since then they have rolled out the concept, which they call Starbucks Evenings, to 26 sites in Chicago, Seattle, Los Angeles, Washington, D.C., Atlanta and Portland. Starbucks has now announced they will be going into hyperdrive with a major expansion of the concept to 1000s of their 11,500 stores around the United States.

In addition to offering beer and wine after 4pm, the evening cafes also offer a menu of savory, shareable, warm small plates and desserts, including such offerings as bacon-wrapped dates with a balsamic glaze, parmesan crusted chicken skewers, truffle macaroni and cheese, artichoke and goat cheese flatbread and salted caramel cheesecake brownie.

Starbucks has already successfully made their stores the place to meet up with friends during the day while you enjoy a wide variety of custom-made coffees, teas or other drinks and possibly a snack or breakfast or lunch selection. In fact, they basically invented what is known as the 3rd place in America and have spread the concept worldwide. Now they will be expanding that social concept into the evenings and nights, and instead of lubricating socialization with non-alcoholic drinks, they are turning up the lubrication dial by creating a place where you can meet and have a cold one or a glass of wine.

They are also tapping into a rapidly expanding trend with their small plate menu – snacking. In fact, today the average American snacks 2-3 times a day, with most of the snacking occurring in the late afternoon, evening and into the night.

I recently had the chance to visit three of the Starbucks Evenings cafes in Seattle. I was very impressed with the interior design. The décor in the evening is more mellow, warm and upscale than the typical daytime Starbucks. And the stores appear to use a richer palette of colors and woods. Starbucks is also giving their store empire a bespoke look by customizing the designs for their locales. Here’s a selection of photos of Evenings stores both in Seattle, Portland and Chicago. 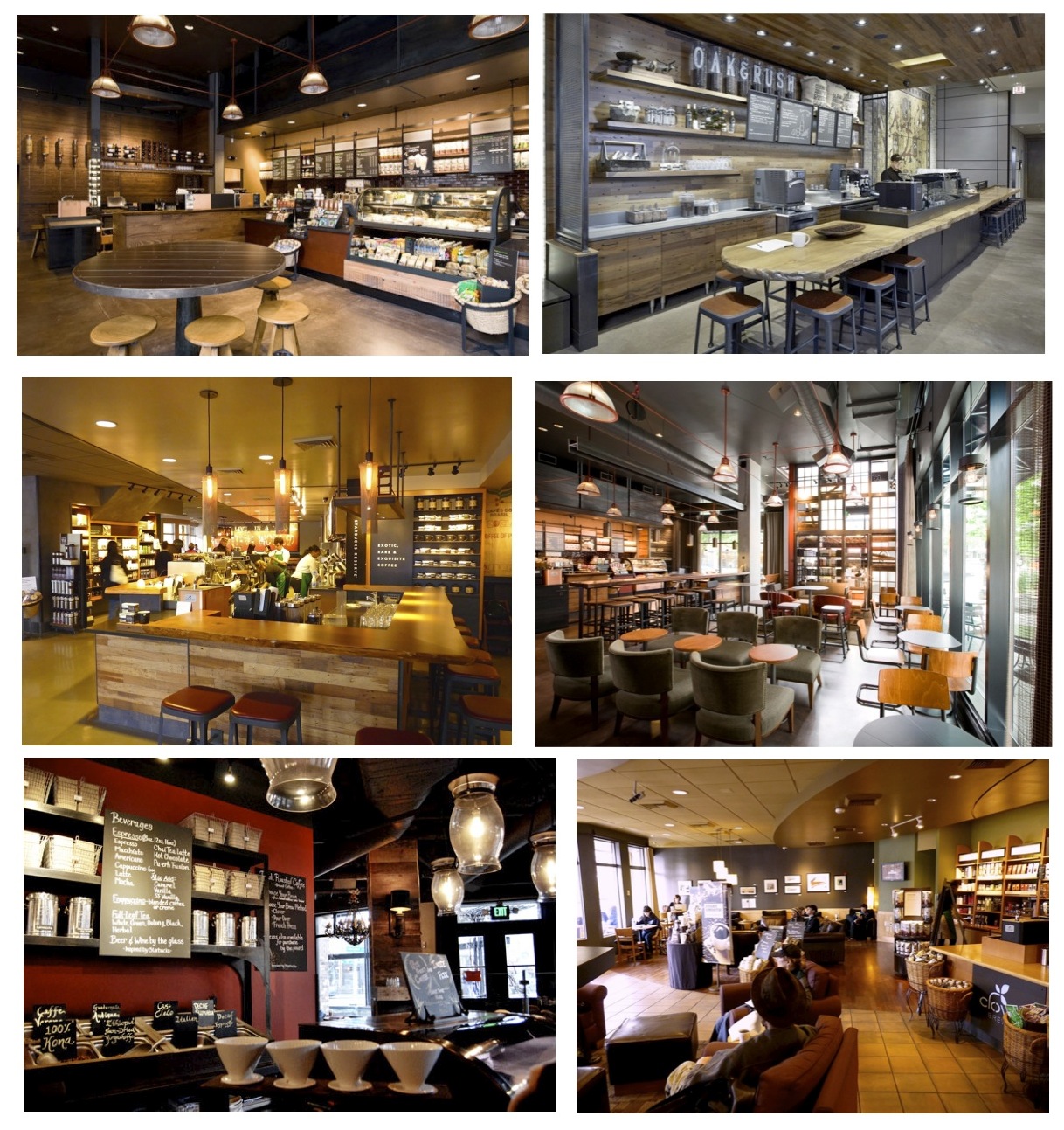 Here’s where the disruption comes in. If you want to meet your colleagues and friends after work or later into the evening to relax and have some great conversation while you have a drink and perhaps a gourmet snack, these Evenings stores offer a much more inviting atmosphere than hanging out at a bar. The Evenings stores have a much more relaxing, comfortable atmosphere, almost a living room ambiance. They are true 3rd place-social hangouts in the evening, no different than Starbucks’ success for the same during the daytime. And based on all the research our company has seen, they are definitely the type of place that Millennials will gravitate to (who already gravitate there during the daytime). In fact, I am much older than Millennials, and I’d much rather meet up with friends at a Starbucks Evenings store than any bar I’ve experienced. In a certain sense, they are much more approachable and far less intimidating then bars.

Starbucks is also very smart by making their stores environmentally responsible and socially conscious. In fact, all their new stores are LEED certified. Research shows this gives them a competitive advantage. For example, research by Technomic found that 63% of consumers they surveyed said they are more likely to visit a foodservice facility they view as socially conscious. This also helps Starbucks attract and maintain a good workforce. Millennials are especially drawn to brands that exhibit sustainability efforts. 85% of Starbucks’ workforce are Millennials.

In a nutshell, I think Starbucks has created a very disruptive new model for an attractive evening and into the night, out-of-home, social destination. They have eliminated the negatives of hanging out at bars and lounges and will have wide appeal to not only Millennials, but also to a much wider adult audience. Bars and restaurants have a new form of competition, which although not a category killer, is sure to cut into their market shares.

View all posts by Randy White →
This entry was posted in Alcohol & bars, Disruption, Millennials, Out-of-home, restaurant. Bookmark the permalink.
Tweets by whitehutchinson