The world of entertainment is evolving and toppling old models. At its core is the rapid growth of the Internet and digital technologies. How, where and when entertainment is consumed has been changed by less expensive in-home and always available mobile digital entertainment and social media. 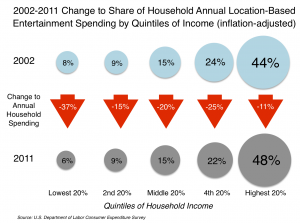 In 2002, the highest 20% of income households ($95,000+ incomes) accounted for 44% of all LBE spending. It grew to almost half (48%) in 2011. Household LBE spending has declined for all income groups with the highest quintile group showing the least decline. Overall, the average American household spent 18% less on location-based entertainment in 2011 than 2002. 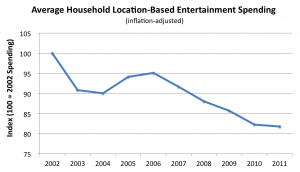 These declines were not caused by the Great Recession, but rather are a long term trend.

This spending data is consistent with data on Americans’ use of time that we reported in the August-September issue of our company’s Leisure eNewsletter. The overall participation at location-based leisure venues declined by 17% between 2003 and 2011. What this strongly suggests is that the decline in household entertainment spending is mainly attributable to declines in attendance, not per capita spending on visits. The greatest attendance declines have been with the lower socioeconomic households.

This is not doom and gloom for the LBE industry. There is ample opportunity for success for LBEs that understand the changing culture of entertainment consumption and how to apply this in their business models to compete with the digital and virtual worlds. We have been reporting on such strategies in both this blog and our Leisure eNewsletter and will continue to do so in future issues. Stay tuned.