Is AMC Bowling’s bankruptcy the harbinger of the death of bowling?

On November 13th, AMF Bowling Worldwide, Inc., the world’s largest operator of some 262 bowling alleys in the U.S. and Mexico, filed for Chapter 11 Bankruptcy protection. The company will continue to operate while it tries to reorganize by restructuring its debt.

In its court filing, the company said it has been unable to significantly reduce costs to combat falling revenue due to both a decline in U.S. bowling league membership and a decline in bowler attendance during the economic downturn. The company also said its failure to upgrade its facilities to a lounge-style, upscale center played a role in the downturn of revenue (AMF does have nine bowling centers with lounges and modern décor operating under the trade name of 300). AMF says it hosts 20 million bowlers a year. If you do the math, that is only 76,000 bowlers per center, not very exciting attendance by location-based entertainment standards. Chuck E. Cheese’s captures almost double that attendance in much smaller facilities.

Basically, AMF attributed its bankruptcy to the decline of league bowling and its failure to renovate its centers to attract today’s open-play, casual bowlers.

Bowling continues to be the most popular form of indoor recreation, attracting a large customer base. Over 71 million people bowled at least once in the last year and about 2.5 million (only 3.5%) of those actively participated in league play. That is a big change from the 1970s and early 80s when league bowlers were the bread and butter of the business, generating over 75% of revenues. Back then, people were willing to commit to come for league bowling at a fixed time every week for up to 32 weeks. What business wouldn’t love to have customers who contract to come every week?

AMF is more than right about the decline in league bowling. Our company’s research shows that league bowling is falling off the cliff with a 28% decline since 2007 in the percentage of the population who are serious bowlers (bowl 13 or more times a year). And they are also correct about a decline in all bowlers. Our research shows that since 2007, the participation rate in casual bowling (12 or less times a year) is down 8%. 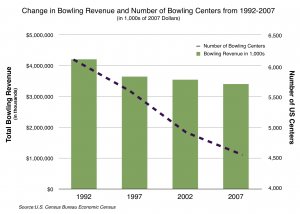 So is bowling dying? Let me suggest we look at it with this analogy. When I was a child many years ago, my mother made hash out of left over roast beef by grinding the roast beef and mixing it with potatoes. You won’t find beef hash on many menus today. However, that doesn’t mean that eating beef or potatoes is dead. It only means that we now serve them up in different ways as our food preferences have changed over time.

Well, that is what is happening with bowling. We once served it up for league bowlers, most of whom would be classified as blue-collar, time-clock workers. Their work was basically boring so they went league bowling to unwind. As the bread and butter of the business, bowling centers were designed to cater to the league bowler, not the open-play bowler. Over time our lifestyles have changed. There are far less blue collar workers with shift work. And many of today’s blue collar workers have to be more skilled to operate computer controlled equipment, making work more challenging and less boring. Many workers today have flexible or varying work hours. Today life is much more spontaneous. We are hardly willing to commit for one event several weeks away, let alone commit to do something for a long series of weeks, even for only a 12 weeks shorter season, which bowling tried in order to retain league bowlers.

No, bowling is not dying, no more than eating beef and potatoes is dying. It’s just that it has to be served up based on today’s lifestyles and leisure preferences, not those of yesterday. Yes, league bowling is dying. However, at the same time, when bowling is served up in an upscale lounge atmosphere or as part of an upscale hybrid bowling-entertainment center, open-play bowling attendance is up. The reason casual bowling participation is down overall is that there are still too many old alleys, the type AMF has, that are a turn-off to today’s higher socioeconomic customers. The demand for casual bowling is elastic. If the right bowling venues are available, the upscale contemporary type, then people will go bowling. If there are only old alleys, then they don’t go bowling.

Yes, old style bowling alleys are dying, but bowling in upscale centers is thriving. Bowling is not dying. It just needs to be served up to meet the tastes and lifestyles of today’s consumers.