2011 household data has just been released by the U.S. Census Bureau from the 2012 Current Population Survey. We prepared the following infograph on the household composition of the U.S. Although the number of households with children is on the decline, in 2011 those 32% of all households included over 60% of the total U.S. population. 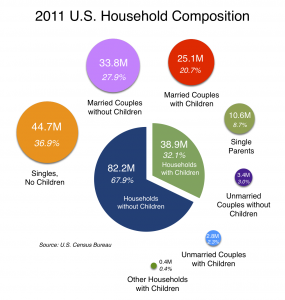 View all posts by Randy White →
This entry was posted in Demographics and tagged 2011, children, composition, household, population, U.S.. Bookmark the permalink.
Tweets by whitehutchinson