Interesting Facts about the Grandparent Market

MetLife and the AARP have both conducted in-depth research on grandparents and recently released their findings. I’ll share with you some of the key findings that are relevant to the out-of-home entertainment, leisure and restaurant industries.

Here’s an infographic on how many grandchildren grandparents have. 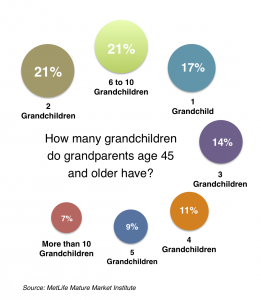 Two-thirds of grandparents (67%) live in the same household or within 50 miles of their grandchildren. 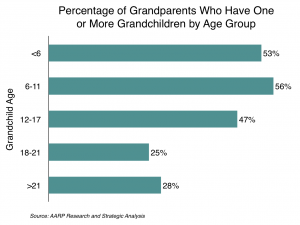 The sweet spot for grandchild-grandparent interaction is with grandchildren ages 6 to 11. Grandparents report a great deal of activity with this age group. It seems to be the time when grandchildren are old enough to enjoy substantive intergenerational activities and communication together and not yet at the age where they tend to spend more time with friends than family. Grandparents take advantage of this time in their grandchildren’s lives by getting familiar with the children’s interests and offering fun new experiences to grandchildren.

Grandparents report one of their common activities with grandchildren is going out to eat. To tap this market, restaurants and entertainment centers should recognize that this is as a very common intergenerational activity and create special opportunities for grandparents and grandchildren to dine out in affordable, kid-friendly settings for younger grandchildren and fun atmospheres for pre-teen and teenage grandchildren, while also being comfortable for grandparents as well.

Surveyed grandparents were asked about their roles and the importance of their relationships with their grandchildren. Spoiling the grandkids is by far on top (36%) – that view has stayed consistent over the years. It’s the only role that grandparents seem to think is more theirs than that of parents or shared between grandparents and parents.

Fifty-seven percent (57%) believe it is their role to spoil their grandchildren by spending too much.

Eighty-two percent (82%) of grandparents report that they spend money to entertain and have fun with their grandchildren. 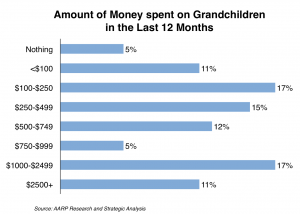 The grandparent market is a significant market that is too often overlooked in both the design and marketing of restaurants and entertainment and leisure venues.