The Europeans who bemoan fast food (the French at least) have taken fast food to the next level. The Europa-Park theme park in Rust, Germany has opened the FoodLoop Restaurant where food arrives on a roller coaster type track in bottles for drinks and in covered pots for the food. Guests order from touchscreens on their tables. The restaurant seats 215 on two floors. 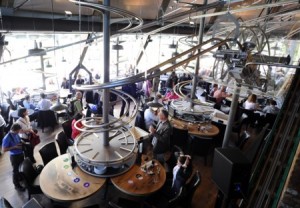 For more, watch this YouTube video of the FoodLoop Restaurant in action

View all posts by Randy White →
This entry was posted in restaurant, Theme Park. Bookmark the permalink.
Tweets by whitehutchinson