In our last Leisure eNewsletter we discussed the trends of decreasing attendance and social stratification at various entertainment and leisure venues. In previous articles we looked at the impact of the recession on community-based out-of-home entertainment. So we decided to dig into some recent data we obtained to see what is happening with bowling and whether it is experiencing the same trends.

Bowling participation is on the decline. The number of U.S. people age 6 and older who bowled at least once during the previous year declined from 60 million in 2007 to 55.8 million in 2010. When you factor in population growth during the same three years, per capita participation in bowling declined by 9%. As bad as that might appear, it’s not the whole story. There are two types of bowlers, the casual bowler, referred to in the industry as the open play bowler, and the serious bowler (almost all are league bowlers). When we looked at per capita participation for the casual bowler (12 or less times a year) and the serious bowler (13+ times a year), we found a 21% decline in per capita bowling by serious bowlers versus only a 5% decline for casual bowlers. 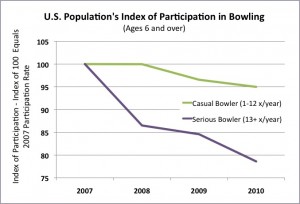 Serious bowlers also declined from 26% of all bowlers in 2007 to only 22% in 2010. And even though serious bowlers bowl more games per year, the total lineage they generate was less than that for casual bowlers and at much lower revenue per game.

This trend is not new. Back in 1998, there were 4.1 million certified league bowlers. In 2010, there were only 2.2 million. If you look at the decreasing numbers of league bowlers over a long time period and graphed it, the graph would show a down slopping line heading in the direction of zero.

Why did we pick Bowling: Death and Rebirth as the title of this blog post? It’s because bowling centers are simultaneously going in two directions. We have the old style bowling alleys that cater primarily to the league bowler dying off at the same time we are seeing the emergence of a whole new generation of bowling venues targeting the casual bowler. The bowling alleys had their heyday not all that many years ago when leagues constituted 70% or more of business. These old-style centers are rapidly disappearing, as their primary customer base is vanishing. As mentioned earlier, there were 900 less centers in 2010 compared to 2002. For some alley owners, the real estate has become valuable enough that they can walk away with a profit. For some, it’s boarding up the center due to deterioration of the socioeconomics in their markets. But some are attempting to keep one foot in the past and one in the future. These owners are renovating, adding gamerooms and maybe other attractions and trying to cater to both league and open play bowlers. Unfortunately, that is not a successful strategy, as the two types of bowlers are completely different with different needs. So the center ends up being a diluted formula not designed fully to really please either. In fact, we are even seeing some new centers follow this formula. We call this strategy ‘extended life support.’

Now the really smart operators, the ones who understand bowling’s present and where it going in the future, are designing 100% for the open play bowler, the vast majority of today’s bowlers. They understand that casual bowlers come from the higher socioeconomic households. By designing their bowling-entertainment centers, bowling lounges and boutique bowling centers for this group, they are achieving revenues far exceeding those of the old alleys and the bowling centers who still try to cater to both type bowlers.

Our company started our work in the bowling industry back in 1989 when we broke bowling paradigms with new designs for our clients and helped them achieve greater success than typical bowling centers at the time. We are currently working on the redesign and renovation of two existing bowling centers and the design of two new hybrid bowling centers that are being designed to capture business from today’s and future casual bowlers.

View all posts by Randy White →
This entry was posted in Bowling, Location based entertainment. Bookmark the permalink.
Tweets by whitehutchinson