My last blog examined the trend of declining household food away-from-home expenditures over the past twenty years. Since there have been some changes in the composition of households over that time period, I decided to also examine per person annual expenditures. The trend is the same as for households; per person 2009 spending is less than inflation-adjusted 1989 spending. Since 1989 per person spending has declined by 13%. Since an interim high in 2005, it has been on a steady decline totalling -10%. It is interesting that the decline started in 2005, several years before the Great Recession. 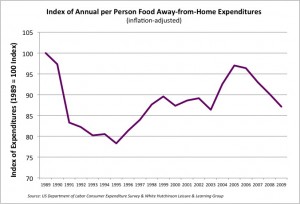 We will have 2010 spending data later this month and once we analyze it, I will be reporting on changes to both out-of-home entertainment and food away-from-home spending on this blog as well as in our Leisure eNewsletter.

View all posts by Randy White →
This entry was posted in eatertainment, restaurant and tagged 20-year, expenditure, food away-ftom-home, per person, restaurant, trend. Bookmark the permalink.
Tweets by whitehutchinson