Are restaurants reaching equilibrium of supply and demand?

The Great Recession had a sudden and severe impact on restaurant sales. Prior to the recession easy financing and hungry shopping center developers fueled an increase in the number of new restaurants resulting in a supply that exceeded demand. The recession just made the situation all the worse when consumers cut back on restaurant visits and spending. Many restaurants were forced to shift to a value-oriented menu to continue to capture business from the new frugal consumer. A large number of restaurant chains and individual restaurants have since declared bankruptcy or closed. Most of the closures were independent restaurants. The NPD Group reports that for year ending March 31, 2011 of the 9,450 restaurant closures, 92% were independent restaurants.

Reports show that sales are slowing returning. However, when you dig into the data and go back before the recession and adjust sales for inflation (*see footnote), it becomes clear that household expenditures for food away-from-home (restaurant and foodservice establishment sales constitute 96% of the category) have been on a decline since the early 1990s. Household food away-from-home expenditures grew in the late 1990s and into the early 2000s to peak in 2001. They have been on a decline ever since. The recession only accelerated the decline. Household restaurant sales were 10% lower in 2009 than in 2001. Households in the highest quintile of incomes ($94,000+) showed the smallest decline in restaurant expenditures since 2001, only -5.9%. The lowest quintile (<$19,000) showed the largest decline, -25%.

If we go back twenty years to 1989 we find that household 2009 restaurant expenditures have declined 15% over the twenty years. The total 20-year decline was fairly consistent across all income households with households in the middle quintile of incomes ($36,000-$57,000) showing the greatest decline of -20%. 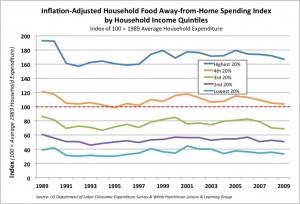 Of course, during those same twenty years, while individual household food away-from-home expenditures were declining, the population grew by 24%. So from a macro countrywide perspective, total food away-from-home expenditures grew 8% (less spending per households but more households spending). The problem is that when you drill down to micro-geographic level, the situation doesn’t work out the same as many markets experienced little or no growth while others had growth exceeding the national average. So in some growing markets total away-from-home food expenditures increased, in the others it declined. 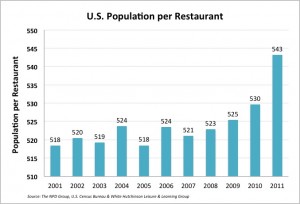 Hopefully the restaurant industry will try to keep its sanity in the future and avoid creating another oversupply that can’t take an economic shock.

* It is unfortunate that most revenue reporting in the restaurant industry is intellectually dishonest, as the numbers fail to adjust for both inflation and population growth. So often when the reports show growth, revenues are actually decreasing absolutely and/or per capita. For example, if inflation is running at 2% and the population is growing at 1% annually, then restaurant sales would have to increase 2% to just stay even, and if you factor in population growth, nationwide sales would have to grow 3% annually just to stay even on a per capita basis.