The truth about restaurant failure rates

It was eight years ago that the NBC television network broadcast a program entitled Restaurant: A Reality Show. During the show, an advertisement by American Express alleged “90% of restaurants fail during the first year of operation.” A high restaurant failure rate was an enduring myth even before that broadcast.

A research study published in the Cornell Hotel and Restaurant Administration Quarterly in 2005 examined both restaurant failure rates and the reasons for failures. Rather than just look at bankruptcy statistics, as did many past studies, the researchers examined 2,439 restaurant operating permits from the Columbus, Ohio, health department over a three-year period and held interviews with current and former restaurant operators. This allowed the research to examine closures and ownership changes, as permits had to be renewed each year and any change in ownership required a new permit. Ownership changes were counted as a failure in the study, although the sold restaurants remained open. (If ownership changes had not been considered a failure, the failure rate would have been lower.)

The graph and chart below show the research findings for restaurant turnover rates (turnover rate does not necessarily mean restaurant closings as those restaurants that were sold, continued to operate): 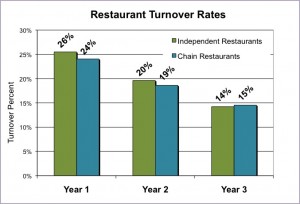 The key finding of the qualitative study was that a successful restaurant requires focus on a clear concept that drives all activities. Concept is different than strategy. Whether or not operators had elaborate strategic plans was not a determining factor for success, but clarity of concept was. Successful restaurant owners all had a well-defined concept that not only provided a food product, but also included an operating philosophy, which encompassed business operations as well as employee and customer relations. Failed restaurant owners, when asked about their concept, discussed only the food product. The researchers concluded it was obvious from the interviews that food quality does not guarantee success; the concept must be well defined beyond the type of food served.

View all posts by Randy White →
This entry was posted in restaurant. Bookmark the permalink.
Tweets by whitehutchinson