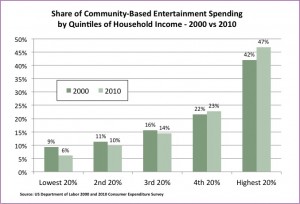 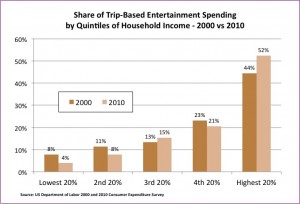 The bottom line is that to succeed in the U.S. venue-based entertainment industry, you have to target and attract the upper socioeconomic households since the out-of-home entertainment spending pie is now smaller and that group owns the largest piece. These are consumers with lots of out-of-home entertainment and leisure choices and with discriminating tastes and expectations. They have high expectations for customer service, food, cleanliness, just about everything. The bar is higher than it has ever been and will likely continue to go up.

Also check out our 2010 in-depth article on The increasing social stratification of out-of-home entertainment and leisure.

View all posts by Randy White →
This entry was posted in Location based entertainment, Out-of-home and tagged 2010, entertainment, out-of-home, social stratification, spending. Bookmark the permalink.
Tweets by whitehutchinson