One thing continues to amaze me about community location-based entertainment (LBE) facilities such as family entertainment centers (FECs) and bowling centers, especially those developed by most independent operators. Those owners don’t appear to understand the importance for their success to match the product to the market. By product, I am referring to the physical facility, its level of professional design, finishes and ambiance, what we call quality-of-place. By market, I am referring to the segment of the population that is the target market with the most spending power for entertainment and what that market segment’s expectations are.

For some reason, most independent LBE developers and operators must think their facilities are in a different consumer world then retail, restaurants and even cinema. As I travel throughout the U.S., I continue to see LBEs that could be described as having warehouse finishes. They have no ambiance, no appealing level of finishes or design. They are basically amateur in design and done on the cheap. I guess their thinking is that the cheaper they can build the facility, the better their return on investment.

Unfortunately, that is not how to achieve success. There are multiple reasons why this approach doesn’t work:

1. The higher socioeconomic segment is the market segment that spends the vast majority of money at community-based out-of-home entertainment venues. Households with $70,000 and greater incomes account for 32% of all households, yet they account for 62% of all community out-of-home entertainment spending. This is the group that you need to attract and please if you want to succeed.

2. There is a long-term trend of social stratification underway; every year an increasing share of all out-of-home entertainment spending is shifting to the higher socioeconomic market. In 2000, those households with the top 40% of all incomes were responsible for 64% of all community location-based entertainment spending. Their share increased to 70% in 2009.

3. The higher socioeconomic market has expectations for upscale facilities, finishes, ambiance, furniture, etc. because that is what they experience at the restaurants, stores, cinemas and other location-based businesses they frequent. In fact, if a business does not have a high enough level of design, the high socioeconomic market does want to frequent it as it doesn’t match their self-image.

4. Even those location-based businesses that cater to a broader socioeconomic are upscaling their facilities, raising everyone’s expectations. The fast food chains are upscaling their décor and ambiance to stay competitive. McDonald’s is rolling out a variety of more upscale restaurants throughout America. Subway is testing out an upscale concept called the Subway Café. 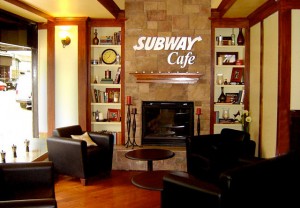 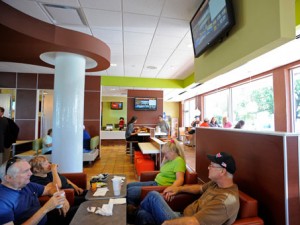 When we look at the vast majority of the successful LBE concepts, they all have upscale facilities that appeal to the upper socioeconomic market. Dave & Buster’s has done so for decades and succeeded. Even Chuck E. Cheese’s has upscaled their finishes and décor in their newer units. One of newer examples is the Lucky Strike Bowl chain with their upscale bowling lounges.

Yet, when I travel the country and visit the newer family entertainment center type facilities, most just don’t seem to understand whom their real market is and what it takes to attract them. They are basically cloning dinosaurs based on the downscale FECs in the 1990’s. As a result, they will be short lived.

Target your market: Why many LBEs have marginal success or failure

View all posts by Randy White →
This entry was posted in Bowling, Design, FEC, Location based entertainment. Bookmark the permalink.
Tweets by whitehutchinson